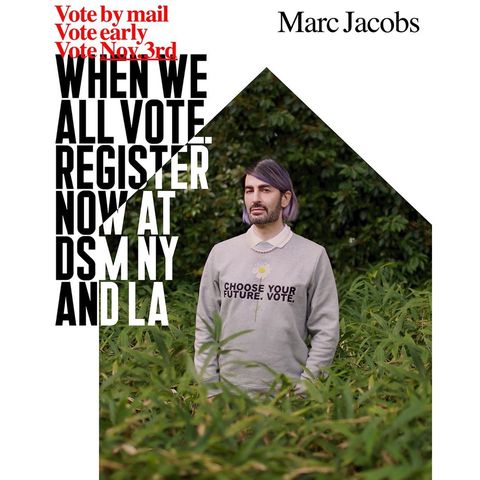 Luxury fashion and streetwear destination Dover Street Market announces a collaboration with When We All Vote, a non-profit, nonpartisan organization that seeks to shift voting culture. The collection, which launches September 26, involves a myriad of notable names that span the fashion and music industries.

Off-White, Marc Jacobs, Vaquera, Hood By Air, and Goodfight are among the many fashion players that had a hand in the election-inspired T-shirt collection. While each contributor put a spin on the line’s overarching call-to-action, a few memorable contributions include Hood By Air’s design, which simply reads “Shitshow,” and Vaquera’s informative approach, which lists voter registration deadlines.

Artistic renderings for the collection were also offered by Selena Gomez, the Beastie Boys, and DJ Honey Dijon who is also designer of her namesake brand Honey Fucking Dijon. Dijon expressed her aspirations for her share of the collaboration, saying “that it’s not just about our individual concerns but for all of humanity. All of these perceived differences and belief systems can’t hide the fact that we all share the planet, and we must do all that we can to ensure that future life can also survive and thrive. It’s not about you, it’s not about me, it’s about us.”

But while the initial draw to the project may lie in its connection to upscale fashions and pop culture icons, its underlying purpose is far more fundamental. When We All Vote is an initiative that was started in 2018 by co-chairs Michelle Obama, Tom Hanks, Lin-Manuel Miranda, Janelle Monae, Chris Paul, Faith Hill, and Tim McGraw. The DSM and When We All Vote collection will not only support the organization’s uplifting and participation-garnering message, but fund its efforts toward future elections.

To showcase garments from the collection, Ronnie Cooke Newhouse interpreted photographs from each contributor into artworks of their own. Filmmaker and frequent DSM collaborator Rose Schlossberg also created a short film in support of the project.

To support participation in the voting process, DSM will also roll out scannable receipts and store displays to encourage voter registration. The DSM and When We All Vote collection proves that fashion can act as a playful promoter of political contribution.

This content is created and maintained by a third party, and imported onto this page to help users provide their email addresses. You may be able to find more information about this and similar content at piano.io

Here’s how to check your student’s school-issued GSuite account. | Parent Coalition for Student...

Dating Someone with Kids? Here’s How to Do It Gracefully