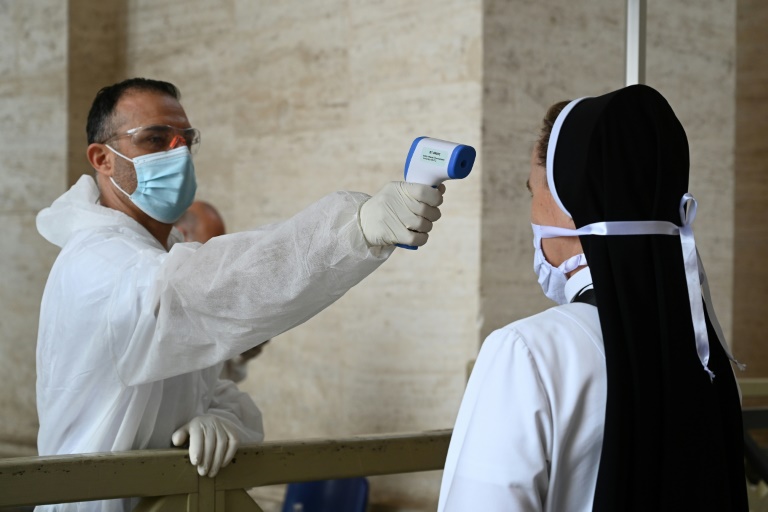 Spaghetti carbonara, Gucci bags and trendy haircuts were back on the menu in Italy Monday, but only the bravest ate, shopped or styled-away their lockdown blues as the country attempted to return to normality.

Restaurants laid on brand-new tablecloths and smart plexiglass dividers to entice clients, but many stood forlornly empty as lunchtime neared, then passed.

At Saint Peter’s Basilica in the Vatican, which reopened its giant doors again, police officers sternly admonished those who allowed their face masks to slip in prayer.

Italy was the first country to go into a full lockdown over two months ago, bringing the economy to its knees.

The official death toll from the virus now stands at just over 32,000.

But its daily toll dropped under 100 Monday for the first time since Prime Minister Giuseppe Conte announced he was shutting down the country in March.

The government started lifting restrictions on May 4.

A limited number of gondolas returned to Venice’s Grand Canal on Monday, though they were only boating the odd local around, in the absence of tourists.

With restaurants, bars, cafes, hairdressers, and stores finally allowed to reopen, some people could not wait to rush out and get their grey roots done or purchase new underwear.

“I’ve tried to do some hair care at home over the past weeks but it’s been a disaster,” said Marie-Antonietta, 56, the first customer in the chair at a hairdressers in Rome’s Testaccio neighbourhood.

“I’m not afraid, I can’t afford to be afraid,” said Gianluca Politano, 30, as he wielded the scissors.

“We’re booked solid for the next two weeks, though we can only have one client at a time. It’s better than nothing though”.

Not all jumped at the opportunity to receive customers again.

“Either they’re not ready to go or they don’t have the economic strength to do so,” said Mauro, a construction worker sipping a coffee at the only cafe open at Rome’s Piazza Navona.

The question on many restaurant owners’ minds was whether customers were psychologically ready to dine out.

At a restaurant near the Pantheon, waiters bustled between some dozen tables, greeting regulars, and delivering plates of artichokes, sauteed chicory and spaghetti.

“I’m a little bit emotional,” one woman confessed as she bumped elbows in greeting with a waiter.

The Goga cafe in Milan seated some 50 diners, with owner Dario Goga saying the business would “survive”.

But at the Scopettaro trattoria along the Tiber river in the capital, no-one had turned up at all.

“We’re opening for a trial run, we’ll give it 15 to 20 days, then if people still don’t come we’ll have to close our doors for good,” said owner Alessandro Trombini, 48.

More than 800,000 businesses which have been under lockdown since Prime Minister Giuseppe Conte imposed restrictions on March 9 were allowed to reopen on Monday, said Confcommercio, Italy’s largest business association.

Signs in the windows of some still-closed shops read: “Without government aid, we CANNOT reopen”.

The high-end luxury fashion shops were seeing a lot more foot traffic than normal shops, an AFP photographer said, with five customers in Gucci at once lusting over bags, belts and baubles on the famed Via dei Condotti.

Families, friends and colleagues can now see who they want, at home or outside. Large public gatherings, however, are still forbidden.

On May 25, gyms, swimming pools and sports centres will reopen. On June 3, people from Europe’s Schengen passport-free zone will be able to travel to Italy, hopefully relaunching the vital tourism industry.

Governor Evers announces more than $5.1 million to serve the transportation needs of seniors...