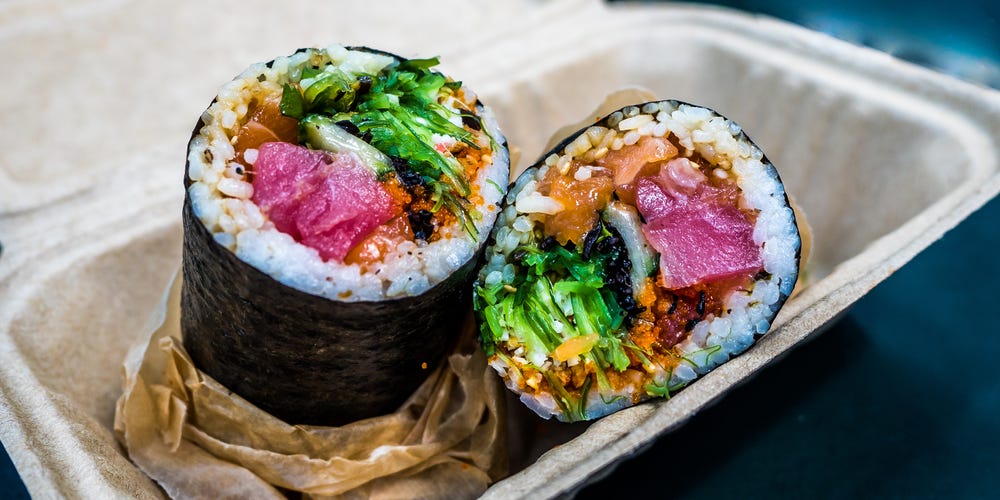 Pregnancy is a joyful time in many women’s lives, but it’s also a time when you have to watch what you eat more than usual. This can make it difficult to get the nutrients you need.

For example, “iron is one of the more common deficiencies that we see with pregnancy,” says Emmy Bawden, a Registered Dietitian Nutritionist and founder of Real Good Nutrition.

That’s partly because pregnant women are told to avoid some iron-rich foods, like raw vegetables and certain meats. To help, we put together a list of foods to avoid and what you can eat instead to maintain a healthy balanced diet throughout your pregnancy.

Avoid foods that increase your risk of food poisoning

Doctors recommend that pregnant women avoid foods that will increase their risk of food-borne illness. That includes:

Food-borne illnesses are especially dangerous for pregnant women because they’re largely caused by harmful bacteria that can jeopardize the pregnancy. For example, listeria is a food-borne bacteria that has been known to cause miscarriage, stillbirth, or illness in newborns.

But just because you can’t eat these foods raw doesn’t mean you have to avoid them altogether.

“Lunch meats we recommend to heat until they’re steaming,” says Bawden. “So if someone’s going out to eat and they’re getting a sandwich, a panini is probably better than a cold sandwich.”

Likewise, to make sure you’re still getting enough protein and iron in your diet you can also eat cooked vegetables, legumes, and beans.

There are also potential risks with eating seafood.

“The concern is always with mercury content of fish, and that being something that can pass the placenta barrier and cause central nervous system damage in the fetus,” says Bawden. Fish that are too high in mercury include:

The Academy of Nutrition and Dietetics recommends pregnant women consume 8 to 12 ounces of seafood per week. For perspective, a regular can of albacore tuna is about 4 ounces.

“You shouldn’t avoid all fish, because the omega-3s that are in fish, EPA and DHA, are extremely important for the development of the fetus, especially for brain health,” Bawden says.

To satisfy your daily omega-3 needs, Bawden says you can eat fish like light albacore tuna or salmon. However, a fish oil supplement is not recommended, since the source of the fish oil is unknown and it may have come from a high mercury source.

If you’re vegetarian, then seaweed and nori are a good source of omega-3.

Avoid foods that increase your risk of nausea and vomiting

To prevent nausea, the American Pregnancy Association suggests avoiding foods with strong smells that could cause nausea, such as onion or garlic. It’s also best to avoid spicy or greasy foods.

“A BRAT diet is always a good bland thing to follow if you have nausea,” says Bawden. (BRAT, stands for bananas, rice, applesauce, toast.)

If you’re in your second or third trimester, in order to get enough calories, Bawden recommends more nutrient-dense foods like high-quality cooked eggs, peanut butter, whole grains, and beans.

Caffeine is also known to cause nausea in pregnant women, so many opt to avoid drinking it during their pregnancy, in addition to fear of potential risks. However, the American College of Obstetricians and Gynecologists reports that up to 200 milligrams of caffeine a day is safe during pregnancy, so there’s no need to completely avoid it if you can tolerate it.

If you still experience nausea, try eating smaller meals more frequently, because that will be easier for your stomach to digest.

School’s In! Learn more about how to help support your child’s good health.

Is it true? Victoria’s Secret Fashion Show Cancelled for 2019?!