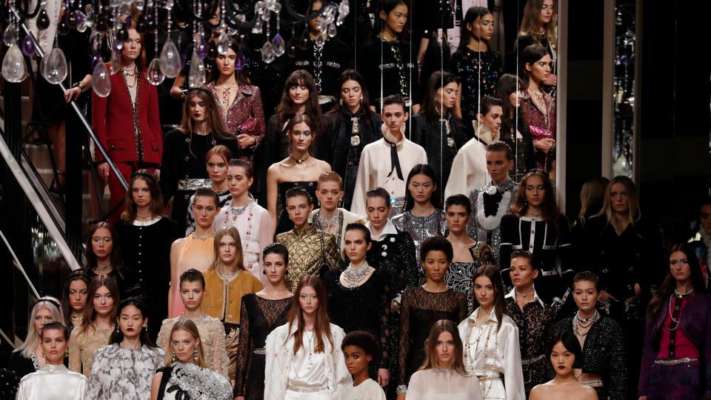 Chanel turned little gilded birdcages into handbags on the catwalk in Paris on Wednesday, at an annual ‘Metier D’Art’ fashion showcase of its most intricate craftwork that also included lacy creations and shiny tweed suits.

The French couture house recreated the Parisian apartment where founder Coco Chanel lived in the early 1900s and where collections were once presented, as models strutted down a reconstruction of its famed winding staircase.

Kaia Gerber, the daughter of supermodel Cindy Crawford, showed off a logo-strewn, black and white ensemble that included a whispy, short skirt, while other models also paraded down the runway in monochrome outfits.

Some wore long strings of pearls, while one dress was entirely embroidered in the semi-precious stones, in a spectacular, twirling pattern.

Rhinestones and golden buttons added pizzazz to jumpsuits and jackets, while many looks carried intricate flower embroideries and ruffles.

Actresses Marion Cotillard and Penelope Cruz were among stars on the front row at the show, which was designed by Virginie Viard, successor to Chanel’s long-time creative chief Karl Lagerfeld, who died in February.

(This story has been published from a wire agency feed without modifications to the text. Only the headline has been changed.)

Disclaimer: This story is auto-aggregated by a computer program and has not been created or edited by Dailyhunt. Publisher: Hindustan Times

The fashion statement of Kamala Harris

Parenting – how to get it right