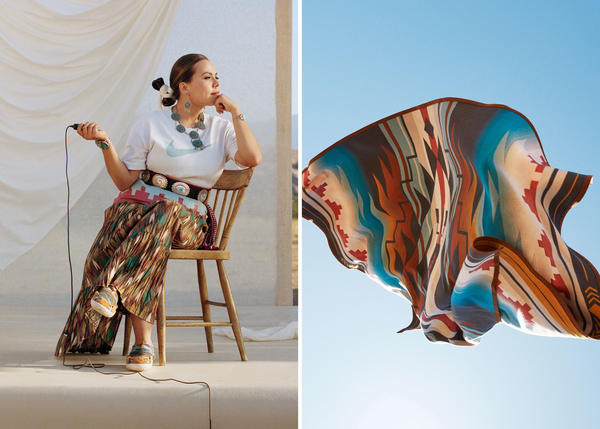 Upon going blind in old age, Phoebe Nez continued to weave rugs in the Navajo tradition, teaching her young great-granddaughter Tracie Jackson how to take up the craft. The member of the Black Streaked Wood People clan of the Navajo Nation (“Tsi’naajinii”) taught Jackson that every color and shape has a purpose that can be altered by many influences, such as creation stories, the environment and individual experiences. Nez committed her designs to memory, continuing to teach Jackson as her eyesight slowly faded.

“My great-grandmother was still weaving right up until she passed at 92,” says Jackson. “My beginnings with looms, rugs and blankets all started with my grandmother. First, I learned by herding her sheep on her farm, then by carding and spinning the wool and finally working the loom. Without my great-grandmother, I wouldn’t have learned about my culture, and without my culture, I wouldn’t have been a designer. My family ties are what influence my native identity.”

Now a graphic designer at Nike, Jackson is passing along her grandmother’s legacy in the 10th anniversary of the Nike N7 collection, honoring heritage through special patterns with Pendleton.

Head’s up: how to transition your child back to school after a concussion